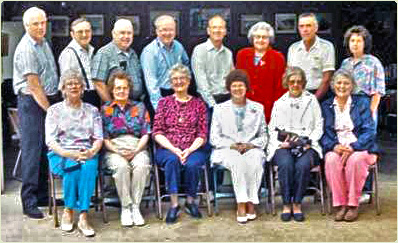 The Reynolds County Genealogy Society was organized in the fall of 1983. Friends Lee Sylcox and Roy DeJournett, who had been researching family history, saw the need for a group to gather and share genealogical material pertaining to Reynolds County. Twelve individuals attended the first meeting in September to discuss the likelihood of success of such a group. In October 1983 the group met again to discuss goals, elect officers, and set up by-laws. Their goals were to gather and house genealogical material for Reynolds County and to share those materials with others and assist them in their research.The first officers elected were Lee Sylcox, president, James E. Bell, vice-president, Roy DeJournett, treasurer, and Joyce Brawley, secretary.

The organization was named Reynolds County Genealogy Society with a charter membership of thirty-five by January 1, 1984. In December 1995 the Society became aware of the need for a county museum when some local antique furniture was lost to another county because Reynolds County had no facility to house it. The Society added Historical to its name, purchased a building, and became the  repository for local historical artifacts. When that first building overflowed, the Society began a campaign to get a larger building. With tax credits and generous donations from local businesses and individuals, the new museum building was opened in May of 2011. The building houses the museum, gift shop, genealogy library, office, rest rooms, and meeting room, which is available for rental to small groups.

The Society logo is a tree placed over the outline of Reynolds County. The tree’s roots extend out beyond the county line and signify those past and present people who came to Reynolds County from other counties, states and countries. The trunk of the tree signifies the body of Reynolds County population past and present. The tree branches also spread beyond the county outline. This represents those who have left Reynolds County for parts throughout the world. Bonnie Mitchell designed the original logo and M.A. Stafford refined it. The large metal logo in the entrance of the museum was created by Herman Stein and presented to the museum by Bill and JoNell Wilson in memory of Leo Wilson and wife June Adams Wilson, who was a charter member and officer of the Society.

Saturday By Appointment Only


Thank You For Your Support!